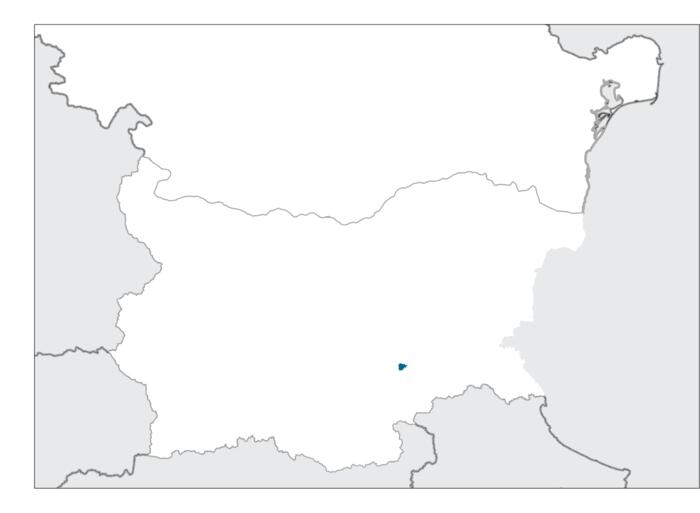 The site is reservoir of the Ovtcharitsa River, east of the town of Radnevo that does not freeze in winter. It is surrounded by low hills of arable land. Immediately next to the dam wall the Fossil Fuel Electric Power Plant Maritza 2 is located. The area is also includes the nearby small pools with standing water, the sedimentation pools of the heating plant and the valleys of several smaller rivers.

The reservoir has open water area, low banks and shallows, covered by sparse hygrophyte vegetation. Some of nearby smaller water pools are also overgrown with water fringe hygrophytes, mainly reed mace Typha spp. The surrounding hills are occupied by arable lands, sown mainly with winter wheat. At certain places in the river valleys of the rivers flowing into the reservoir there is marsh and hygrophyte grass vegetation, strips of trees with prevailing willow Salix ssp. and, more rarely, mesoxerothermal vegetation, dominated by Poa bulbosa, Lolium perenne, etc.

Birds in the protected area

Yazovir Ovcharitsa SPA is a site of international importance for wintering waterfowl. Every year up to 45,800 waterfowl of 35 species concentrate there. Of the 87 birds species, established there, 31 are listed in the Red Data Book for Bulgaria. Of the birds occurring there 62 species are of European conservation concern (SPEC), 4 of them being listed in category SPEC 1 as globally threatened, 6 in SPEC 2 and 21 in SPEC 3 as species threatened in Europe. The area provides suitable habitats for 21 species, included in Annex 2 of the Biodiversity Act, which need special conservation measures, of which 19 are listed also in Annex I of the Birds Directive.

Observation of Saker Falcons during the breeding season show that birds stage in the area and if suitable preconditions exist it would be possible birds to breed there. There are data about breeding of the Saker Falcon in the past and still there are good food base, though the nesting sites are not enough. Targeted studies during the period 2008 - 2013 confirmed that the area is important site for Saker Falcon both on migration and during the winter. Satellite tagged Saker Falcons from Slovakia, Romania and Hungary were staging in the area during the roaming and the autumn migration which indicates the importance of the site for the Pannonian population. Reducing the mortality of juveniles is of importance for the stability of the overall European population and a significant potential for natural restoration of the Bulgarian breeding population.

The reservoir is with key importance for the Cormorant Phalacrocorax carbo, Dalmatian Pelican Pelecanus crispus and White-fronted Goose Anser albifrons, considerable numbers of which spend the winter there. Although rarely, the Red-breasted Goose Branta ruficollis is also recorded as a wintering species. The reservoir has significant value at national level for the Black-throated Diver Gavia arctica and the Great White Egret Egretta alba.