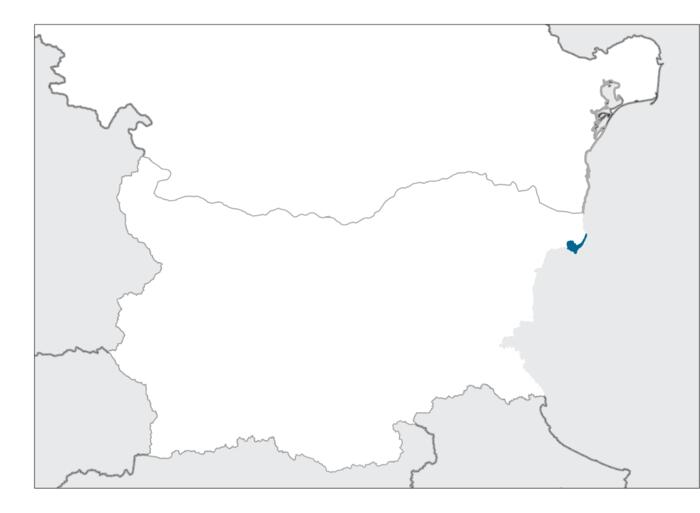 The site is located in north-eastern Bulgaria and bears the name of the cape within its limits. It covers the easternmost part of the Dobrudzha plateau, with altitude from 0 to 150 m. To the west it borders on the town of Kavarna, to the north - on the villages of between Rakovski, Hadzhi Dimitar and Sveti Nikola. To the north-east it’s limit follows the road Sveti Nikola - Kamen Bryag - Tjulenovo up to cape Shabla, including the coast with its adjacent shallow marine area from cape Shabla to the port of Kavarna. The village of Bulgarevo and the tourist resort Russalka are also in its limits. The coast is fringed with vertical cliffs up to 100 m high, with characteristic caves and niches. The vegetation is characterized mainly by the prevailing steppe associations and sparse trees and shrubs. It develops on shallow soils and almost exposed limestone rock. The region between Bulgarevo, cape Kaliakra and the area of Eni Kulak holds the last and best preserved steppe habitats in Bulgaria. They are the result of the combination of specific relief, soils and climatic conditions and it is especially important to conserve them, as they support typical species of the steppe biome. Most of the plants belong to the xerothermal type of formations. The flora of Kaliakra resembles the Crimean flora.

Birds in the protected area

The Kaliakra SPA is the only site in Bulgaria, which keeps the remaining Eastern Dobrudzha steppe, as well as the biggest cliffs along the Bulgarian Black Sea Coast. It supports 310 bird species, 71 of which are listed in the Red Data Book for Bulgaria. Of the birds occurring there 106 species are of European conservation concern (SPEC), 17 of them being listed in category SPEC 1 as globally threatened, 21 in SPEC 2 and 68 in SPEC 3 as species threatened in Europe. The area provides key habitats for 100 species, included in Annex 2 of the Biodiversity Act, which need special conservation measures, of which 95 are listed also in Annex I of the Birds Directive. The territory of Kaliakra holds the last big and comparatively well preserved steppe habitat in the Dobrudzha. It is inhabited by typical steppe species, which are quite numerous - Stone Curlew (Burhinus oedicnemus), Greater Short-toed Lark (Calandrella brachydactyla) and Calandra Lark (Miliaria calandra), Rose-colored Starling (Sturnus roseus). Almost the whole national population of the Pied Wheatear (Oenanthe pleshanka) is concentrated in the region. The Stone Curlew, the Greater Short-toed Lark and the Calandra Lark are presented there with the biggest populations in the country. The coastal cliffs host the only Bulgarian colony of the European Shag (Phalacrocorax aristotelis). The open biotope supports a number of birds of prey, like the Long-legged Buzzard (Buteo rufinus), the Common Kestrel (Falco tinnunculus), the Hobby (Falco subbuteo), the Levant Sparrowhawk (Accipiter brevipes), the Eagle Owl (Bubo bubo), etc.

At present SPA Kaliakra is one of the very probable breeding sites of the Saker Falcon in Bulgaria. The species is regular during both spring and autumn migration and in the winter period, which was proved by the targeted studies during the period 2008-2013 and by additional observations during the period afterwards. Satellite tagged birds from Hungary, Romania and Ukraine used the area during migration.

The region is of exceptional importance during migration and it is typical bottleneck site, as it is located on the Via Pontica - the second biggest migration flyway in Europe. Every autumn considerable numbers of soaring birds - more than 29,000 storks, pelicans and cranes and more than 3,000 birds of prey, including globally threatened species like the Pallid Harrier (Circus macrourus) and the Imperial Eagle (Aquila heliaca) - pass over Kaliakra. The site is one of most important roosting areas for migrating Red-footed Falcons (Falco vespertinus).